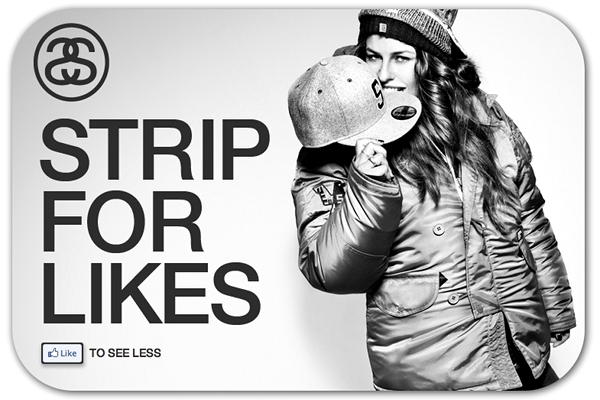 Advertisers for Stüssy Amsterdam have taken Facebook viral marketing to new levels by featuring a model who will strip for ‘likes’. The clever campaign will display the entire Spring Summer 2012 collection. As Facebook ‘likes’ increase, the model will shed a new item from the collection.

The campaign has gained quite a bit of coverage to date with many deeming it offensive, for objectifying women. It’s also been called misleading as Facebook’s no-nudity policy won’t allow the model to end up completely naked.

In addition to this, the campaign may also abuse Facebook promotional guidelines.

“The problem with the campaign, however, besides the glaringly objectifying angle that it’s taken, is that it could be in violation of Facebook’s Terms of Service.

Facebook’s promotional guidelines read, “You must not use Facebook features or functionality, such as the Like button, as a voting mechanism for a promotion.”

While this guideline does refer to a “promotion (such as competition or sweepstake)”, the wording is vague enough that, if Facebook wanted to shut this campaign down, it looks like it would be perfectly within its right.” [NextWeb]

Marketing and advertising execs are constantly trying to find the next big viral idea, but this blogger wonders if this is a step too far?

At the very least Stüssy Amsterdam have caused a controversy, which means publicity. Everyone loves publicity… Right?