Ryanair: Why being rude works… 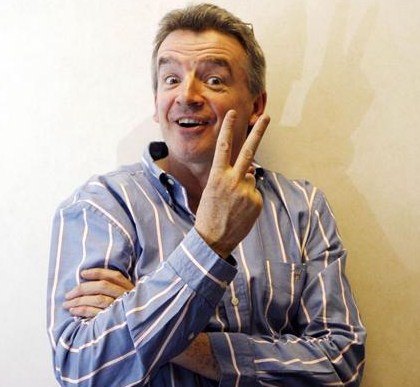 In the latest ploy to garner more media attention, Ryanair chief executive, Michael O’Leary, has called Suzy Mc Leod, who racked up 560,000 likes, for her Facebook posts about excessive charges, an idiot.

Mc Leod was charged €300 by the airline for printing six boarding cards. While Ryanair do allow passengers to check in up to 14 days before their flights, Mc Leod was in the unfortunate position of having a 15 day holiday and therefore could not print her return flights boarding cards before her holiday.

“When flying from Alicante to Bristol yesterday, I had previously checked in on-line but because I hadn’t printed out the Boarding Passes, Ryanair charged me €60 per person!!! Meaning I had to pay €300 for them to print out a piece of paper! Please ‘like’ if you think that’s unfair… : – ( “

Ever the gent,  O’Leary made fun of McLeod for falling to find an internet cafe in Alicante to print out her boarding passes, in a press conference yesterday.

According to the Independent O’Leary said that 99.98% of Ryanair passengers print their boarding passes in advance:

“To those who don’t, we say quite politely: ‘Bugger off’ ”. He added that Ms McLeod had written to him requesting compensation and “a gesture of goodwill”, and he had responded by saying: “It was your fuck-up”.

O’Leary’s PR and marketing team clearly have no influence over him as I doubt any PR pro would recommend the slag your customers off strategy. Has he learnt nothing from NV nightclub?

While both companies depend on customers bums on seats, the main difference is Ryanair has cornered the Irish market for low cost flights and as such the public will save a few euros and put up with the crap.