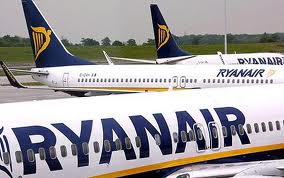 Ryanair, Ireland’s favourite airline, (on Dec 14th) announced that Stephen McNamara, after 4 years of being battered and abused by Michael O’Leary on one side and the European media on the other, has decided to pursue an easier life and will, in February next, join the IRFU as their Director of Communications.  Stephen can expect to take far fewer hits working for Irish rugby than he does working for Ryanair.  Having joined Ryanair four years ago as its Head of Communications, Stephen has played a leading role in the successful growth and development of the airline, which has now become the No.1 carrier in Spain, Italy, Poland and the UK, as well as the world’s favourite airline, with 79.4m passengers in the current year.
Stephen will officially leave Ryanair on 7th February next, after an extensive round of lunches and dinners with his many friends and admirers in the media, all paid for by the Ryanair press entertainment budget of €3.94.
Ryanair confirmed that it will now advertise for its Head of Communications vacancy, and see how many PR luvvies apply for what some in the media have described as “the worst job in PR”.  Working as Ryanair’s Head of Communications has proven to be an incredible platform for previous incumbents being head hunted to become Director of Communications for Kellogg’s, the FAI and now the IRFU.  Perhaps the GAA or the Irish Olympic Committee will come looking for Ryanair’s next Head of Communications?
If you think you have what it takes to work with Europe’s largest airline email a CV and covering letter (quoting FRHOC001) to recruitment@ryanair.com.  Applications close on Friday 21stDecember at 5:30pm (GMT).
Ryanair’s Michael O’Leary said:
“I would like to thank Stephen for the fantastic job he’s done for Ryanair over the last 4 years.  As a company that spends little on advertising, we rely on our Communications Department to generate loads of free PR, as well as responding to the never ending series of absurd claims and fanciful stories that surface on a daily basis.  Working in the calm waters of Irish rugby should prove a piece of cake after 4 years in Ryanair.  We wish Stephen every success as he joins the IRFU, and hope that they will be as successful over the next 4 years, as Stephen and Ryanair has been over the last 4.
“In the meantime we look forward to recruiting another brave soul to take on the “worst job in Irish PR” and look forward to grooming the next candidate to take over the high profile and incredibly overpaid position as Ryanair’s Head of Communications.”
Ryanair’s Stephen McNamara said:
“I am sorry to be leaving Ryanair after 4 incredible years but I am looking forward to joining a great team at the IRFU.  This is one of the fastest moving companies in Ireland, and I have enjoyed promoting Ryanair and dealing with the media across 22 different EU countries, as well as putting out fires, usually late on a Friday afternoon, when some crazy claim appears about Ryanair’s continuing 28 year success, our incredible safety record and our unbending commitment to offering the lowest fares to consumers in every market in which we operate.”