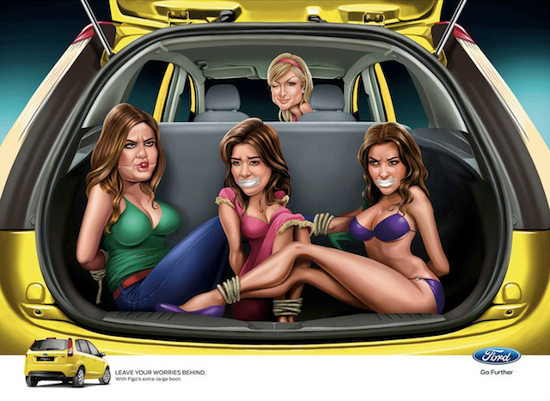 According to Ford, they deeply regret a series of disturbing print ads created by advertising agency JWT India for their Figo model. The ads show various female celebrities bound and gagged in the trunk of a Ford car, apparently mockups which were never meant to go public.

“We deeply regret this incident and agree with our agency partners that it should have never happened,” the company said in a statement. “The posters are contrary to the standards of professionalism and decency within Ford and our agency partners. Together with our partners, we are reviewing approval and oversight processes to help ensure nothing like this ever happens again.”

Business Insider report that JWT India shared the mockups—which Ford had not approved—with website Ads of the World. The mockups were later removed from Ads of the World, but not before going viral. Major media outlets, from Forbes to Fox News, are now covering the story.

WPP, which is the parent company of JWT India, issued this statement:

“We deeply regret the publishing of posters that were distasteful and contrary to the standards of professionalism and decency within WPP Group. These were never intended for paid publication and should never have been created, let alone uploaded to the Internet. This was the result of individuals acting without proper oversight and appropriate actions have been taken within the agency where they work to deal with the situation.”

One ad shows former Italian Prime Minister Silvio Berlusconi driving a FordFigo with three women bound and gagged in the trunk, with the tagline, “Leave your worries behind with Figo’s extra-large boot.” A second ad features Paris Hilton at the wheel, with the three Kardashian sisters tied up in the trunk. Ford’s logo is emblazoned across both ads.

I’m looking forward to seeing how this one plays out…