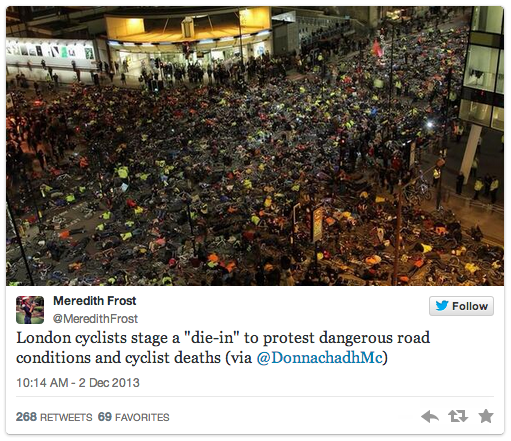 Leon Daniels, managing director of TfL Surface Transport, said one of the protesters’ key demands – segregated cycle routes – were to be introduced in the next 10 years.

He said: “We are all shaken by the recent spate of deaths on the roads, and our sympathies are with all the friends and families of those affected. The protesters are rightly demanding safety should be at the top of our priorities. It is. That’s why we are investing nearly £1 billion in upgrading the existing superhighways with greater segregation, introducing major new segregated routes and backstreet quiet routes, and overhauling dozens of junctions to give more protection to cyclists. Delivering such major improvements will take time, but we are working flat-out to do so. We and the mayor have set out our plans and the first major improvements, such as the segregated extension of the Superhighway to Stratford, are now being seen. Over the forthcoming weeks and months Londoners will see many more improvements as the investment we are making bears fruit.”

This is a really interesting visual and has been excellently organised. I’m actually quite surprised I haven’t heard and seen more about this.