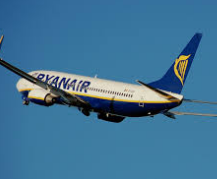 More than 100 travellers, including children, were stranded on a Ryanair flight called police from the tarmac after being left for hours without food or drink. Tired and hungry, they asked flight attendants for food and water but were refused. The ordeal saw police called by passengers to intervene.

One passenger vlogged (check out the video below) the incident on her smartphone which has since been viewed more than 500,000 times since being uploaded to Youtube.

After the video emerged, Ryanair issued an apology but claimed that passengers had been given water on the plane and said the captain had also called the police for assistance.

Last night a Ryanair spokesman said strong winds forced more than 20 airlines to divert into Stansted from from Heathrow and Gatwick on February 14, disrupting handling and fuelling operations at the airport. ‘After approximately two hours waiting for fuellers, the captain requested the handling company (Swissport) to allow the passengers into the terminal which was locked,’ the spokesman said.

‘The captain switched on the aircraft’s air conditioning while waiting for Swissport staff to arrive and the cabin crew provided water to passengers. When Swissport failed to arrive the captain requested the police to let the passengers into the locked terminal.’

The spokesman said passengers were then given refreshment vouchers.

Last night a spokesman for Swissport said: ‘Swissport staff were under extreme pressure dealing with an unprecedented level of flights and whilst we accept we should have unloaded the passengers sooner we simply had no one available to unload when contacted by the captain. Swissport regret any delay to passengers and to Ryanair.’