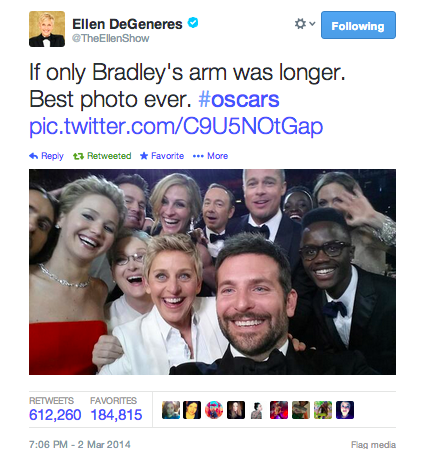 We’ve all seen it by now but what motivated Ellen to take the selfie that almost broke Twitter?

According to The Wall Street Journal, Samsung spent an estimated $20 million on advertising, which included some product placement. When Ellen decided she wanted to take selfies during the show, Samsung executives were drafted in to train her how to use the smartphone during rehearsals. When Ellen tweeted the selfie, she didn’t mention Samsung  but the fact it was taken by a Samsung phone was clear on the TV screen at the time. The placement certainly benefited the major brand as at one point Samsung was getting about 900 mentions a minute on social media.

Samsung has released a statement denying the stunt was pre planned stating:

“While we were a sponsor of the Oscars and had an integration with ABC, we were delighted to see Ellen organically incorporate the device into the selfie moment that had everyone talking. A great surprise for everyone, she captured something that nobody expected.”

It added that “in honour of this epic moment”, which has generated over three million retweets so far, the brand will donate $US1.5 million to two charities chosen by DeGeneres: St Jude’s and the Humane Society.