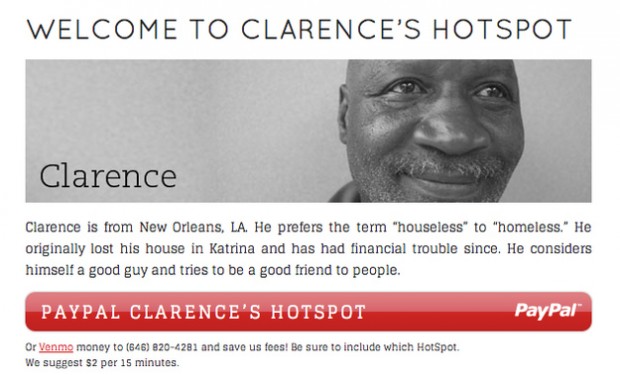 Outside an annual tech startup conference in Austin, Texas, USA, 13 homeless men and women wore white shirts that read,”I’m _____, a 4G hotspot.”  Each one carried a wireless internet device, and for a PayPal donation, provided attendees with as much Internet as they wanted. 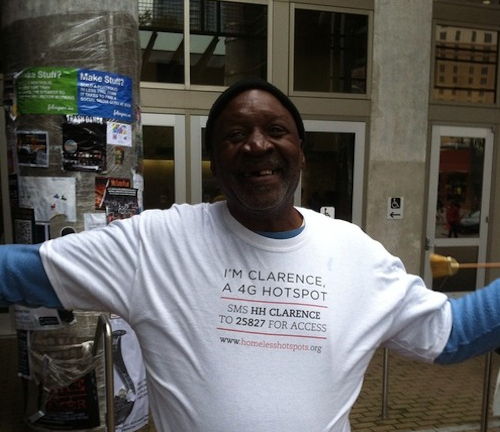 Orchestrated with the marketing firm BBH in cooperation with the homeless advocacy group Front Steps, “Homeless Hotspots” is being roundly criticized as exploitative and wrong.

@tcarmody: We did this, people. What happened? America happened…homeless being used as Wifi hotspots…

However, BBH and Front Steps aren’t giving in to the criticism and have reiterated that the money goes directly to the homeless individual of which neither group takes a percentage of the profit.

“We have very few tools to help homeless,” said Saneel Radia of BBH, “and one is rooted in print media.  It just seems outdated —but the basic model seems to work.”

“The model isn’t inherently broken, Radia explained, “It’s simply the output that’s archaic in the smartphone age.”  Their goal is to “create a modern version of this successful model, offering homeless individuals an opportunity to sell a digital service instead of a material commodity.”

At the moment, in Ireland, a number of homeless people sell the ‘Big Issue’ as a way to earn money without resorting to begging. It seems the companies behind ‘Homeless Hotspots’ are looking at alternative ways for the homeless to earn money. This is a clever way of giving homeless people a way to earn their own money but BBH and Front Steps need to be clever about the way they market this. I think it’s really important to give people tools to help themselves however I foresee plenty of issues with this initiative, with the individuals involved being used as commodities at the forefront.

BBH and Front Steps should also be using the homeless people as ambassadors for the programme. I imagine the campaign gave each of the homeless people involved a huge ego boost as the money rolled in, not to mention a roof to sleep under and a hot meal, following the first payment. Testimonial home videos  following the campaigns initial day would have been a great ploy from the companies and a great way to silence some of the programme’s critics.