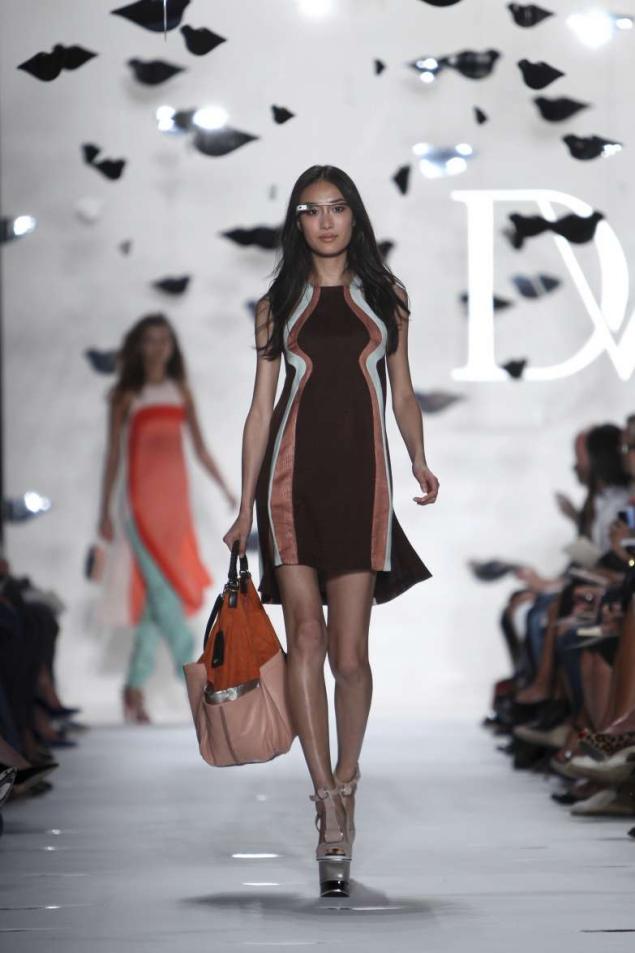 Lately Diane Von Furstenberg has been the powerhouse of PR partnerships; designing a swimwear line for ROXY and joining forces with Evian to create a limited edition 2013 bottle which will be available in November 2012. Von Furstenberg’s latest partnership saw her partner with Google for New York Fashion Week, in a fashion first which saw the marriage of fashion and technology.

And what have Google got to do with fashion I hear you ask?

Well they’re called Google Glasses and they made their debut during Von Furstenberg’s show at New York Fashion Week.  The frames have built-in screens which add a digital layer to what the wearer sees by enabling Internet, an Android operating system, motion sensors, GPS and a camera. With these glasses you can update your Twitter feed, send emails and text without the inconvenience of a handheld phone.

Some of the models taking to the catwalk wore Google glasses as did Von Furstenburg in an effort to capture all the behind the scene’s action which will be made into a short film available at  www.google.com+DVF tomorrow. The project was promoted with the hashtag#DVFthroughGlass, which will also title the short film.
Clever campaign from Google in an effort to engage with the fashion folk. The glasses are unavailable to the general public at present but will be delivered to developers who have pre-ordered the glasses at $1,500 a pop in the coming months.
Smart move from Google to limit the availability as this strategy has proven to work in fashion circles.
I’m looking forward to seeing the coverage captured.
Love Niamh x